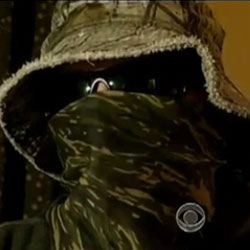 The FBI believes that the homeless man they arrested on Thursday was “Commander X”, a member of the People’s Liberation Front (PLF) associated with Anonymous hacktivism.

According to an indictment filed against Christopher Doyon and another man, Joshua John Covelli, the charges specifically relate to a denial-of-service attack against the servers of Santa Cruz County in December 2010, after the city put in place a law prohibiting camping inside the city. The indictment gives Doyon the aliases “PLF”, “Commander Adama” (clearly a Battlestar Galactica fan) and “Commander X”. Covelli meanwhile is alleged to use the pseudonyms “Absolem” and “Toxic”. 26-year-old Covelli was previously named in connection with internet attacks on PayPal.

Someone calling themselves “Commander X” gave an interview to CBS News earlier this year, claiming responsibility for denial-of-service attacks by Anonymous.

According to a CBS News report, “Commander X” told their reporter that he had no fear about being caught:

"We're not going to turn ourselves in. They can come and get us is what I say. Bring it on. Until then, we run... We will remain free and at liberty and at large for as long as we can, and when the time comes that each and every one of us eventually will be brought to justice, we will hold our head high in any court of law and we will defend our actions."

Doyon is scheduled to appear on September 29th for a bail hearing.