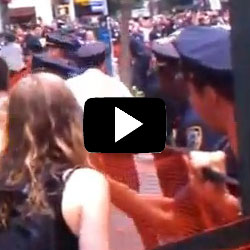 A senior officer with the New York Police Department has been named online by activists associated with the Occupy Wall Street activists, in connection with the controversial use of pepper spray against a group of female protesters.

On Saturday, in an incident captured on video, a small group of seemingly peaceful protestors were said to have been doused with pepper spray by a uniformed officer.

Warning: Some readers may find the following video upsetting.

Even some of the police officers seen in the video seem shocked by the use of pepper spray.

Now, after slow motion examination of the video, the Anonymous group has published what it claims to be the spraying police officer’s personal information – including phone numbers, addresses, and the names of relatives.

It is claimed that the officer was identified by online supporters of the Occupy Wall Street movement after his badge was enlarged from a photograph taken at the scene. Clearly, feelings are running pretty high over this incident, and if police officers acted without provocation appropriate steps should be taken. If a police officer is guilty of an offence then obviously he should be punished.

But it feels very wrong to me to name a man who we have to assume is innocent until proven guilty, and especially dangerous to make public his address and the details of his family.

With feelings running high, it is easy to imagine how innocent parties might be hurt by such details being made public.

Anonymous is no stranger to releasing personal information of individuals in positions of authority. For instance, last month it released partially nude photographs of a man said to be Linton Johnson, the chief spokesperson for the San Francisco’s BART, as well as names, postal addresses and email addresses of officers.