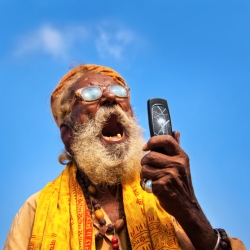 New spam regulations, introduced in India, limit the users of mobile phones to sending only 100 texts per day.

The reason? To stop the growing problem of SMS text spam.

Cellphone usage is huge in India, with more than 700 million subscribers. But with that popularity comes the problem of users being constantly plagued with unwanted calls and text messages from tele-marketing firms.

Under new rules access providers will have to limit SIM owners to sending only 100 SMS text messages a day (or 3000 per month).

In addition, commercial calls and marketing text messages will only be allowed to be sent between 9am and 9pm. A relief for many users who have received mobile marketing communications in the small hours of the morning.

Last month, Indian telecoms minister Kapil Sibal rather optimistically announced that the SMS spam problem would cease to exist within six weeks, following the introduction of a national “do not call” list.

Mobile phone users in India just need to text 1909 to opt-out of receiving unsolicited calls and texts, but of course it remains to be seen if the tele-marketing companies honour the list.

Will the new regulations make a noticable dent on the torrent of SMS spam hitting Indian mobile phone users? Only time will tell.

One thing is certain – sending bulk text messages is becoming cheaper and cheaper, and is more likely to be read by the intended recipient than an unsolicited email message. As such, there will be people who will be keen to bend the rules and continue to send spam messages to mobile phones.