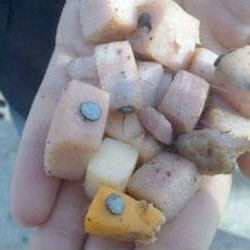 If you want a rumour to go into overdrive, then Facebook is the place to kick things off.

A message is being shared widely between Facebook users, telling dog owners to be careful if they take their pet to the park – as there might be pieces of cheese lying around containing nails. New trend at dog parks, nails in pieces of cheese, if you take your dogs to dog parks, please be careful!!

Some messages also refer to anti-freeze being antifreeze found in dogs’ water bowls.

As a dog owner myself, the warning strikes a chill in my heart – and I can well understand why animal-loving Facebook users have shared it thousands of times. But the lack of any further information rings an alarm bell in my mind.

Is this a legitimate warning, or is it a hoax? After all, the warning doesn’t say *where* in the world or *when* this has happened, and doesn’t include any links where dog owners can find out any more information.

Here’s what the real skinny is.

The warning *does* appear to be based upon a genuine incident. However, the nails were found in pieces of cheese in a park in Buenos Aires, Argentina. In July. You can read the Spanish-language news report here.

So, a dog walker in Argentina, in July, found some pieces of cheese, ham and sausage which contained nails scattered near a kennel. That’s clearly horrible and alarming for people who may live nearby, but that’s a far cry from saying that such sick acts are a “new trend”.

Websites like Facebook have made the world a much smaller place, and allowed rumours and scares to spread more quickly around the world than ever before. Yes, you should always be careful about what your dog eats in a public place – but you should also be quick to check the facts before sharing a link or a photograph with all of your Facebook friends. A warning without background information isn’t really useful to anyone at all – and may simply lead to people being frightened unnecessarily that their pet may be in peril. We see similar scares started about viruses on Facebook – time and time again.

Don’t feel too bad if you helped this message spread across Facebook without including the right background information to put it in context, I’m sure you had the right intentions. Just make sure that next time you think before you click.

To make you feel better, here is a picture of my dog Archibald.

Make sure that you keep informed about the latest hoaxes and scams spreading fast across Facebook and other internet attacks. Join the Sophos page on Facebook, where over 100,000 people regularly share information on threats and discuss the latest security news.

19 comments on “Nails in pieces of cheese left at dog parks? A Facebook scare ignites”