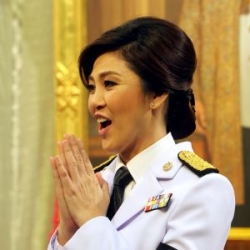 Thailand’s Prime Minister, Yingluck Shinawatra, had her Twitter account hacked this weekend – meaning that her followers saw a stream of messages criticising her leadership.

Ms Yingluck, who is Thailand’s first female prime minister, has been criticised for having no previous political experience, with some observers claiming that she is a puppet for her brother – and former Prime Minister – Thaksin Shinawatra.

Critics have also questioned her response to floods in the country. Of course, this is far from the first time that hackers have used their skills to spread a political message. And we should probably be grateful that the attack did not have a more malicious intent (such as linking to a phishing site or a malware-infected webpage).

Even media outlets, such as the New York Times, NBC News and USA Today have fallen foul of hackers on Twitter.

At the time of writing, Ms Yingluck’s Twitter account has been suspended. Presumably an investigation is taking place as to how security was compromised – was the Thai Prime Minister’s password too easy to guess? Phished? Or sniffed from the air because of sloppy WiFi security?