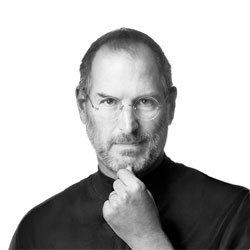 It’s impossible to express how sad many people in the technology world feel at the news of the death of Steve Jobs.

Sickeningly, as with the deaths of other figures in the public eye, there are scammers waiting to take advantage of bad news.

Here’s a scam we have seen on Facebook, claiming that free iPads are being given away “in memory of Steve Jobs”.

In memory of Steve, a company is giving out 50 ipads tonight. R.I.P. Steve Jobs [LINK]

The cool-sounding link sucks you in, tricking you into believing that you may get a free iPad but then goes on to get you to complete online surveys to “qualify”.

The link goes through the bit.ly short url service (we have asked our friends at bit.ly to shut the link down) and we can see that over 15,000 people have already clicked on the link which was set up within hours of Steve Jobs’s death first being announced. Of course, if you were one of those people who clicked on the link you may be wondering what the chances are that you will receive a free iPad. I hate to disappoint you, but it’s pretty unlikely.

The webpage you are taken to is very similar to ones we have seen pointed to by other scammers. Here’s what I saw: I am writing this article from the Virus Bulletin conference in Barcelona, and you can see that the page has automagically determined where I am in the world and adjusted its language and wording as appropriate.

Below you’ll see how the survey pages look if you visit them from Sydney, Australia, for instance. If you don’t click through within a few seconds, it plays an audio message urging you to do so:

You’ll notice that the audio message spectacularly fails to mention the 50 free iPads, which have by this time been reduced to the promise of “an exclusive reward”, whatever that might be.

My colleague Paul Ducklin captured the audio and – being a fountain of interesting but not always entirely relevant information – tells me that the speaker is an Australian who grew up in South Africa.

When Duck visited the page a second time from Sydney, this is what he saw: How do the scammers make money? Well, they are earning affiliate cash – in a nutshell, they make more money the more traffic they can direct to websites, driving more people to become customers, or take online surveys and competitions.

Cynically, they exploited the death of Steve Jobs in the hope of driving large numbers of internet users to websites offering content such as contests, surveys and online gambling. The fact is, of course, that they could just as easily have taken those users to a webpage containing malicious code or a phishing page designed to steal credentials.

Chances are that this won't be the only scam we see regarding the untimely death of Steve Jobs. It wouldn't be a surprise, for instance, to see scams which might try to take advantage of those moved by the loss of Apple's founder with lures like "Donate to Steve's favourite charities as a tribute".

If you do want to pay tribute to Steve Jobs, the most appropriate place it seems to me would be Apple’s website itself.

The truth is that the scammers are not geniuses like Jobs, and they don’t contribute anything to the world of technology or wider society as Steve Jobs did. It’s a shame that they can’t be inspired by speeches like the one Jobs gave at Stanford University in 2005, and make something better of their lives.

I think that’s how we should remember Steve Jobs today.

Please folks – always think carefully about the links that you click on. Time and time again scammers and cybercriminals have proven themselves to have no qualms about exploiting news stories – whether it be the personal tragedy of a teenage girl committing suicide, bizarre escapades, a natural disaster or the latest salacious celebrity gossip.