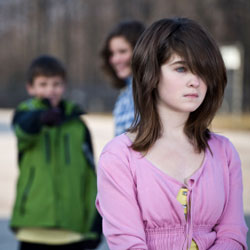 A new survey of American teenagers and young adults has discovered that three out of every 10 have had their Facebook, Twitter or MySpace accounts broken into for the purposes of snooping or impersonation.

And most know who was responsible.

The poll, conducted by Associated Press-MTV, asked a total of 1355 people between the ages of 14 and 24 about their experiences online, and suggests that the problem has doubled since 2009.

Richard Lindenfelzer, a 20-year-old student from Ithaca College in New York, explained how he had left his Facebook account open, giving a friend an opportunity to post comments about his love life.

“It’s meant to be funny. It’s supposed to be obvious that this something I would never say,” explained Lindenfelzer.

Does everyone really find it so funny though?

Clearly some people are amused by their friends’ antics, but the poll found that 46 percent of people were left upset by having their online accounts intruded upon.

In some cases, it may be bitchy schoolmates who are posting hurtful things on your Facebook page in your name, designed to humiliate you. Or someone snooping on their boyfriend or girlfriend’s private messages.

It’s understandable that many of the victims can feel violated and distressed when their password is guessed or stolen, or a momentary lapse means they left their account open for someone unauthorised to gain access.

The fact is that unauthorised access to an online account is illegal in most countries. By sending a message from somebody else’s email account without permission, or posting an offending tweet or status update, you’re both breaking the law and showing disrespect to the privacy of your friend or classmate.

The world is changing, and the wide access to the internet and social networking sites are presenting young people with new issues that earlier generations simply did not have to face. We all have to learn how to behave appropriately and with respect, and not think that just because something can be done (for instance, logging into a friend’s email or Facebook) that it should be done. If you act unconcerned when a friend posts a vulgar status update in your name, or blasts out an email from your account without your permission, then you are tacitly approving of the behaviour in general and not helping spread the message that accounts are supposed to be private to the individual.

MTV and Associated Press conducted the survey as part of MTV’s “A Thin Line” campaign, which is designed to encourage young people to differentiate between digital use and digital abuse.