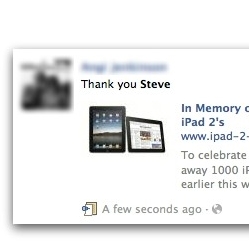 Repeat after me – Apple is not giving away any free iPads, iPhones or MacBooks in memory of Steve Jobs.

Nevertheless, it appears that many people believe that the company is doing a special promotion to honour the passing of their late founder judging by the number of people who are currently being scammed on Facebook.

The scams began within hours of Steve Jobs death, and have – if anything – escalated over the weekend.

The following message is being seen on Facebook frequently right now:

To celebrate the life of Steve, we have decided to give away 1000 iPad 2's to honour Steve, who passed away earlier this week.

If you do click on the link you are taken to a webpage that encourages you to share the message with your Facebook friends (adding the phrase “Thank you Steve”).

Notice how the page explains that time is limited, and there are only a small number of free iPads remaining – that’s a deliberate trick on the part of the scammers to fool you into rushing into the scam without thinking. Regular readers will not be surprised to hear that the scammers are pretending to offer free Apple hardware in the hope of driving traffic to revenue-generating online surveys.

A similar scam is being seen regarding free limited edition iPhones, again allegedly being given away in memory of Steve Jobs:

In Memory of Steve Jobs, Apple has decided to give away 1000 Limited Edition iPhones
[LINK]

Users are duped into believing that if they share the link on Facebook with their online pals, and add the message “Thank you Steve from (city)” they will receive a limited edition iPhone. And the scammers also claiming that you can receive a free MacBook too.. In Memory of Steve Jobs, Apple has decided to give away 1000 Black Macbook

In this case, the scammers urge you to share the link with your Facebook friends, adding the message “RIP Steve”: Make sure that you keep informed about the latest scams spreading fast across Facebook and other internet attacks. Join the Sophos page on Facebook, where over 100,000 people regularly share information on threats and discuss the latest security news.