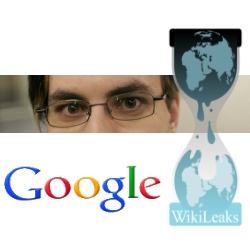 The US government has forced Google and the small internet provider Sonic.net to hand over information from email accounts belonging to WikiLeaks volunteer Jacob Appelbaum, news outlets reported on October 11.

According to a story in The Wall Street Journal, the government used a controversial, secret court order to force the information handover.

Google wouldn’t comment for the story, but Sonic told the WSJ that it had fought the court order and lost.

Challenging the order was “rather expensive, but we felt it was the right thing to do,” said Sonic’s chief executive, Dane Jasper, according to the story.

Included in the government’s demands were the email addresses of people with whom Appelbaum corresponded over the past two years, but not the full text of emails.

Google and Sonic pressed for, and eventually won, the freedom to inform Appelbaum of the secret court orders.

Appelbaum, who hasn’t been charged, is something of an accidental spokesperson for WikiLeaks. He’s a developer for the Tor Project, a nonprofit that provides free tools to help people maintain privacy online by fending off network surveillance and traffic analysis and preventing tracking of location and browsing habits.

Appelbaum has also volunteered with WikiLeaks – an association that was inadvertently leaked in a blog post on the Committee to Protect Journalists site in April 2010.

Since then, Appelbaum has become a public advocate for WikiLeaks.

The law in question is the Electronic Communications Privacy Act, passed in 1986 to extend government restrictions on wire taps from telephone calls to include transmissions of electronic data by computer. The law makes it relatively easy for the federal government to demand that service providers hand over consumer data stored on servers, and it hasn’t been shy about using that power.

Starting in 2009, Google began to reveal the number of requests made for data by the U.S. government. In six months, Google reported receiving 4,601 requests, including search warrants, subpoenas and more. It complied with 94% of those requests.

Regardless of Google’s admission, it’s difficult to gauge the extent to which the government is using these secret orders. The orders are typically sealed. Service providers are restricted from informing customers that their data has been handed over, and those who’ve been targeted have no way of knowing that their electronic personas have been searched.

Critics of the law include proponents of civil liberties, and they have solid ground to stand on.

In January, attorneys fighting against handing over Twitter IP addresses of WikiLeaks supporters argued that because IP addresses can be used to locate a person’s specific geographic location, such a demand constituted a search under the Fourth Amendment and thereby required a warrant.

Interestingly enough, on the same day that news of the secret orders targeting Appelbaum’s email became public, TechDirt posted a piece about alternative DNS systems that have been popping up as a way to ignore U.S. censorship.

These are in response to the Homeland Security Immigration and Customs Enforcement division having begun to seize domains, without notification or adversarial hearing – a tactic reminiscent of seizing private email without a warrant.

The alternative DNS systems started with a Firefox browser extension – called MAFIAAfire – that routes around any such domain seizure and takes the user directly to the sites of the seized domain.

Beyond the browser extension, alternative DNS systems are showing up, set up by intellectual property pirates looking for a workaround.

Maybe it’s a stretch to say that IP pirates deserve the same protection as citizens whose email accounts are being ransacked by the secret police, but the furtive actions of those secret police are the same in these instances: no warrants, no notifications, no hearings, only stealthy decisions made by a government working in the dark.

Will we see alternative email systems spring up to protect the privacy of those people who wish to avoid the government having unfettered access to their private communications? After all, the MAFIAAfire browser extension was put together in less than a week by developers who had no clue how to even make a Firefox extension when they started (they’ve got a timeline of the extension’s development on their website.

An interesting possibility. But in the meantime, the bare minimum takeaway from Appelbaum being targeted is that there is no such thing as electronic privacy. None. Not in email, not in the cloud, not on Google’s servers or anybody’s, for that matter.

In fact, with the current state of federal law, that old, threatened, anachronistic standby, snail-mail, might be the safest way to try to avoid having the government reading over our shoulder.