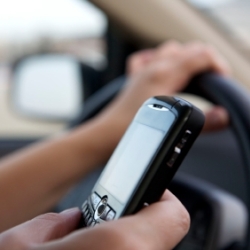 According to media reports, police in the United Arab Emirates have given a surprising explanation for a dramatic fall in traffic accidents last week: drivers’ BlackBerrys weren’t working.

It’s claimed that last week’s worldwide BlackBerry outage, which frustrated business people around the world who were unable to communicate with their colleagues, had one positive result – less texting and reading of emails by people who should have been concentrating on driving instead.

Road traffic accidents in Abu Dhabi are said to have dropped by 40%, and there was a 20% reduction in Dubai in the past week.

According to The National newspaper, Lt Gen Dahi Khalfan Tamim, the chief of Dubai Police, and Brig Gen Hussein Al Harethi, the director of the Abu Dhabi Police traffic department, both linked the drop to the service disruption experienced by BlackBerry users.

“Absolutely nothing has happened in the past week in terms of killings on the road and we’re really glad about that,” Brig Gen Al Harethi told the newspaper. “People are slowly starting to realise the dangers of using their phone while driving. The roads became much safer when BlackBerry stopped working.”

There may be another explanation for the reduction in mobile-phone related traffic accidents in the UAE, however. At the end of last month, popular UAE footballer Theyab Awana was killed in a high speed crash near Abu Dhabi, and it was claimed that he was sending a message on his BlackBerry when he hit a lorry.

The football star’s father, Awana Ahmad Al Mosabi, made an emotional plea to people not to use smartphones while driving, and a Facebook campaign against the use of BlackBerry Messenger while driving has grown in popularity.

Of course, texting messages or reading emails while you are in charge of a motor vehicle is insane. You aren’t just putting yourself at risk, you’re putting other innocent travellers in peril as well.

If you need any convincing, here’s a shocking video that was made to highlight the danger. Please note: the video is graphic and may be upsetting to some people.

Whether you believe the police are right that the BlackBerry outage contributed to the reduction in road traffic accidents or not, please don’t text and drive.