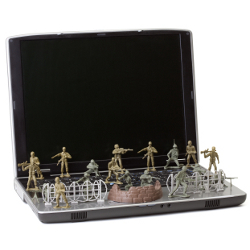 The New York Times is reporting that the United States nearly chose to use “cyber weaponry” in the lead-up to the attacks on Libya earlier this year.

It is an interesting development that US officials are considering their offensive cyber capabilities to be mature enough to consider relying on them in conventional warfare situations.

Soon after the aerial assault on Libya began, US officials were again confronted with the choice of whether to hack into Pakistani systems to aid the capture of Osama bin Laden.

In both cases the decision was no. James Andrew Lewis, a senior fellow at the Center for Strategic and International Studies, spoke to the New York Times and speculated that the US was uncomfortable with setting a dangerous precedent by being the first to offensively use a cyber weapon.

It is unclear exactly why the US didn’t proceed, but it appears several factors influenced the decision.

Some are suggesting that the urgency of the invasion may not have left an appropriate amount of time for the network attacks to proceed. Gaddafi’s troops were advancing quickly on the rebels, and breaking into their military networks would not have been as simple as it appears in the movies. Another factor was a US law known as the War Powers Resolution. The President has limited powers to declare war without the approval of the US Congress. Would a cyber attack be construed as assistance to the NATO mission, or an act of war?

This is likely not the last time we will learn of the use of hacking and malware, or their consideration, during times of war. The question to be asked is, would these cyber weapons end up in the hands of our enemies?

We saw how Stuxnet was clearly designed for a very specific purpose and not intended to infect machines around the world, but once something is designed to self-replicate, our worst nightmares (SKYNET) can become reality.