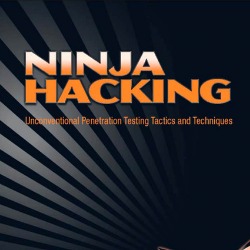 Be in no doubt, credibility is high for this book.

Authors of “Ninja Hacking”, Thomas Wilhelm and Jason Andress, certainly have expertise in the field of computer security, with particular focus on penetration testing. They also have experience in both the academic and corporate environments.

Rather than being a show-and-tell collection, Ninja Hacking is best explained as an expansion of Schneiers’ “The Security Mindset.”

The book attempts to tie the skills of the Ninja to that of a penetration tester. This kind of comparison is indeed a popular theme in computer security publications, with many loosely referencing Eastern cultures: ‘Ninja this’ or ‘Tao of that’.

Ninja Hacking however does indeed provide a rich vein of Japanese (and Chinese) history and culture, which is weaved through the book successfully.

The authors also manage to avoid romanticising the unequal societies that allowed for the formation of Ninja and Samurai cultures. These inequalities seem to me at least to be referenced appropriately.

The authors divide the book (of 17 chapters) in to six sections:

All in all, while the writing style is light, the content is, for lack of a better term, meaty. This is definitely not recommended as an entry level book, but it is an excellent resource for penetration testers and those thinking of commissioning pen tests on their systems. Disclaimer: When this book was released in October 2010, there was a hacking competition (involving deciphering some puzzles). The prize was a copy of the book.

I was one of the 6 successful competitors and was awarded this prize.

NOTE: If you would like your book to be considered for review by the Naked Security team, email us at tips@sophos.com.