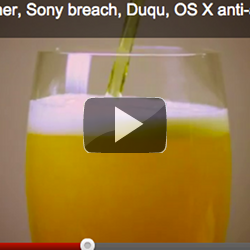 * The “Bundestrojaner” telephone interception software used in Germany comes under the spotlight for being a bit too malware-like.

* The Duqu malware is being touted as “Son of Stuxnet”, despite having more differences than similarities.

* OS X malware called Flashback has shown up, this time with anti-anti-virus capabilities.

* Microsoft’s YouTube channel got hacked, but it’s an open question whether anyone missed the videos whilst they were off the air.