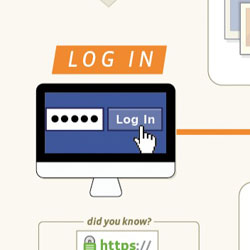 New official statistics revealed by the social networking giant reveal that 0.06% of the more than billion logins that they have each day are compromised. The statistic was revealed in an infographic published alongside an official Facebook blog post trumpeting new security features introduced by the firm.

The new security features include Trusted friends (called “Guardian angels” in the infographic).

Facebook says that you will be able to nominate three to five “trusted” friends who can help you if you have a problem accessing your account – if, for instance, someone else has changed its password and locked you out of your email account. The idea is that if you need to login to Facebook but can’t access your email account, Facebook will send codes to your friends that they can pass on to you. None of your friends on their own has enough information to access your account, as they are only sent a single code. But, of course, if your “trusted” friends turned out to be untrustworthy and banded together they would – between them – be able to access your account. So you best be sure that you keep a close eye on who your trusted friends are (especially if you’re prone to falling out, or they think practical jokes are amusing), and be pretty confident that they are taking their own computer security seriously.

Oh, and it might be an idea to remind yourself what the word “friend” actually means, as history has shown that many Facebook users have a very different idea of what a “friend” is from the rest of the world. 🙂

Another thought occurs to me – if a bad guy has taken over your Facebook and email account, isn’t it likely that he will also change who your trusted friends are at the same time? Wouldn’t that make the whole security measure kinda pointless? However, it’s not hard to predict that the only people who might use such a feature might be those who are already very aware of privacy issues, rather than the great unwashed majority on Facebook.

Facebook’s infographic is too long and thin to properly embed on the Naked Security site, so here’s a link to where you can download a version for yourself.

Make sure that you keep informed about the latest scams spreading fast across Facebook and other internet attacks.

Join the Sophos page on Facebook, where over 140,000 people regularly share information on threats and discuss the latest security news.

What are your experiences of spam, malware, scams and cybercrime on Facebook? Is Facebook doing enough to make their social network a safer environment?

Leave a Reply to Carl B Cancel reply