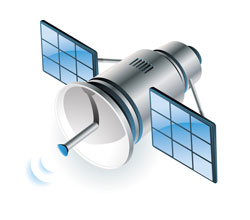 It sounds like the stuff of James Bond – foreign hackers managing to gain unauthorised access to US satellites as they orbit 700 km above the Earth, and interfere with their controls.

Maybe, if things were turning really bad, the hackers could even “damage or destroy the satellite.”

Well, if the upcoming annual report by the US-China Economic and Security Review Commission is to believed, maybe this isn’t just the imagination of a Hollywood scriptwriter.

According to Bloomberg BusinessWeek, a Congressional commision report to be released next month will reveal that hacker interfered with the operations of two US government satellites in 2007 and 2008.

The hackers, who were said to have gained access to the satellites via a ground station in Spitsbergen, Norway, are said to have interfered with the running of the Landsat-7 and Terra AM-1 Earth observation satellites which examine the planet’s climate and terrain. According to Bloomberg BusinessWeek, the report claims Landsat-7 experienced “12 or more minutes of interference in October 2007 and July 2008”.

NASA’s Terra AM-1 satellite, meanwhile, is said to have suffered interference for two minutes in June 2008 and nine minutes in October of that year. According to the draft report, “the responsible party achieved all steps required to command the satellite.”

The draft report doesn’t mince any words regarding how it perceives the seriousness of the hack:

"Such interference poses numerous potential threats, particularly if achieved against satellites with more sensitive functions.. Access to a satellite‘s controls could allow an attacker to damage or destroy the satellite. An attacker could also deny or degrade as well as forge or otherwise manipulate the satellite’s transmission."

Although the report falls short of directly accusing China of being behind the hack, it does say that the four satellite hacks are consistent with known Chinese military warplans to disable enemy satellite systems and “ground-based infrastructure, such as satellite control facilities.”

But – as is normal – no compelling evidence is supplied to support the theory that China *was* responsible for the hack attack. And you have to ask yourself, what modern army *wouldn’t* consider the benefit of knocking out an enemy’s satellite systems if they could.

Equally, if the ground station in Norway was connected to the public internet as is claimed, isn’t it also possible that a hacker in his back bedroom was messing around rather than probing on behalf of an enemy government? Unless more convincing evidence is found of who was behind the hack, we all remain in the dark.