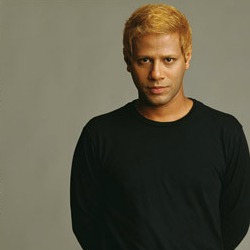 Several months after 9/11, Hasan M. Elahi discovered, while he was re-entering the country at a Detroit airport, that he been flagged on a watch list.

From U.S. Customs, to the INS, down the hall to an interrogation room, weeks later on into a Justice Department office, in front of an FBI agent and then into a six-month odyssey that turned him into a very frequent guest at Tampa FBI headquarters, Mr. Elahi was thoroughly interrogated, polygraphed and investigated.

He cooperated. He cooperated to a painful degree. In fact, as it turns out, Mr. Elahi is a neurotic record-keeper.

When asked what he was doing on Sept. 12, Mr. Elahi took out his Palm PDA and told him: He paid his storage rent at 10, met with his graduate student Judith at 10:30, taught an intro class from 12 to 3, and then taught an advanced class from 3 to 6 (Elahi is an associate professor and an interdisciplinary artist at the University of Maryland).

The agent was, naturally, a little surprised. “I don’t think he was expecting me to have such detailed records,” Mr. Elahi said in a a TED Talk, “Hasan Elahi: FBI, here I am!” that the New York Times recently adapted for an article.

After being told *exactly* what he had been doing not only on Sept. 12 but for a good six months, the FBI evidently came to the conclusion that they had received an erroneous report about the artist having stored explosives in a Tampa storage facility and having then fled the country. This is a very talented multimedia artist we’re talking about. It’s kind of a happy, torturous serendipity that the Feds chose him to launch an incorrect investigation upon.

If you look at Mr. Elahi’s site, you can see not only evidence of his compulsion to be upfront with the Feds (documenting his comings and goings as he travels, posting his purchases of kimchi and laundry detergent and you name it, posting photos of his motel rooms’ rumpled beds) but also his interest in issues of surveillance, sousveillance (the practice of watching from below [sous-] rather than above [sur-]), simulated time, transport systems, and borders and frontiers.

Even as his server logs record “repeat visits” from the Department of Homeland Security, the C.I.A., the National Reconnaissance Office and the Executive Office of the President, Mr. Elahi considers himself shielded by his “barrage” of information. “A lot of work is required to thread together the thousands of available points of information,” he writes. “By putting everything about me out there, I am simultaneously telling everything and nothing about my life. Despite the barrage of information about me that is publicly available, I live a surprisingly private and anonymous life.”

He continues: “In an era in which everything is archived and tracked, the best way to maintain privacy may be to give it up. Information agencies operate in an industry that values data. Restricted access to information is what makes it valuable. If I cut out the middleman and flood the market with my information, the intelligence the F.B.I. has on me will be of no value. Making my private information public devalues the currency of the information the intelligence gatherers have collected.”

I’m sorry to say that Mr. Elahi is wrong. I haven’t followed business intelligence for a number of years, so it’s safe to assume that my knowledge of data analytics from the likes of Teradata and IBM is quite outdated and that the technology from such firms has since evolved considerably.

But I can assure you, the image of one human being combing through one artist’s proliferative data sets is quaintly misguided.

That’s how the artist evidently envisions his interrogators: “My activities may be more symbolic than not, but if 300 million people started sending private information to federal agents, the government would need to hire as many as another 300 million people, possibly more, to keep up with the information and we’d have to redesign our entire intelligence system.”

They have software that will crunch his data, your data, my data. This is the first time in a long time I’ve felt the urge to check in with anybody about data analytics. But I know for sure, based on completely outdated familiarity, that Mr. Elahi is painting a cartoonish picture similar to that of Colonel Klink being flummoxed by Hogan’s clever antics.

I hope that the Feds have a good sense of humor and can appreciate Elahi’s antics.

But regarding what we as citizens should learn from his exploits, I strongly agree with two commenters in a Slashdot posting.

The first lesson, from ohnocitizen: There is nothing that a citizen can gain by handing information over to authorities, regardless of how charmed his interrogators surely were by this articulate artist. “Flooding the FBI with information and hoping for privacy is like talking to the police and hoping for clemency,” ohnocitizen writes. “Everything in the fascinating ‛Why you shouldn’t talk to the police’ lecture applies here.”

The Fifth Amendment to the United States Constitution ensures that “No person … shall be compelled in any criminal case to be a witness against himself.”

There are extremely good reasons to invoke this, as the law school professor and former criminal defense attorney outlines in the lecture mentioned by ohnocitizen. One of the most compelling is that anything you say can and will be used against you in a court of law.

Given that the laws of this land have grown to a point that they are now considered unquantifiable, there is no way that anybody can open their mouths and say anything that can’t potentially be used against them.

I also agree with this Slashdot comment from this Anonymous Coward, who states:

“Mr. Elahi seems to confuse the fact that the FBI may no longer care about his daily whereabouts with the fact that they can’t sort through the data should every one do what he’s doing. Will it be more difficult? Yes, but it’s not impossible. Google searches the web in near real-time using sophisticated indexing strategies and there is no reason to believe that the FBI couldn’t do the same with people and publicly available information to obtain statistically meaningful deviations from normal behavior on your part which could then be referred for human followup.”

As dusty as my analytics knowledge is, Anonymous Coward’s words all ring true.

I applaud Mr. Elahi’s artistic talents. But I’d still suggest that we all guard our privacy and cherish the Fifth Amendment.