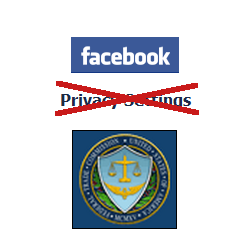 The United States Federal Trade Commission announced a proposed settlement with Facebook Inc. over their alleged deceptive practices regarding privacy.

The FTC launched an investigation into Facebook after a complaint was filed by the Electonic Privacy Information Center (EPIC) and a coalition of other privacy groups.

The FTC’s investigation resulted in an eight-count complaint against the social media giant. The complaint lists several cases where “Facebook allegedly made promises it did not keep.”

The FTC’s press release lists the most prominent of the issues that got Facebook into trouble:

If the settlement proceeds the FTC would require Facebook to agree to the following conditions:

The settlement now enters into a public comment period where residents of the United States can provide feedback to the FTC on the fairness of the settlement.

I think the measures the FTC suggests in the settlement will go a long way to ensuring Facebook users are aware of how their data is being handled and provide necessary oversight to be sure policies are followed.

What concerns me is that this is a “consent agreement” and therefore “does not constitute an admission by the respondent that the law has been violated.” What the FTC is alleging is an enormous abuse of power by a multi-billion dollar company. No fines? No admission of guilt? Where is the punishment for abusing our privacy rights for the last 5 years?

This settlement doesn’t address all of the suggestions Naked Security has made to Facebook about security on their platform, but it may result in more respect for their users’ privacy.