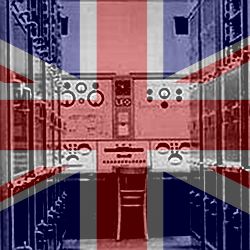 That should be an easy question to answer – a lot easier than adjudicating the “Who invented the tablet?” legal spectacular currently playing out between Samsung and Apple in courtrooms around the globe.

After all, there was only a handful of computers in the world until the 1950s. A handful, at least, to count, but certainly not to transport. Early electronic computers were huge, because they used bulky thermionic valves (known more descriptively as tubes in North America) as digital switches.

Valves were larger and more expensive than relays, and ran hot. But they could switch thousands of times faster than any relay.

So early computers were, of necessity, vast, power-hungry, heat-spewing, room-filling digital beasts arrayed in rack after rack of similar-looking components woven together with a plethora of electrical cables.

(The more things change, the more they stay the same. That sounds like any modern data centre, wouldn’t you say? All so we can ask Siri whether we need an umbrella, instead of looking out of the window, which is what they did in the 1950s.)

But how do you define the first electronic digital computer?

Konrad Zuse’s Z3 was a general-purpose computer completed in Germany in 1941. It worked – indeed, I’ve seen its modern-day replica clattering away in the Deutches Museum in Munich – but it doesn’t count as an electronic computer because it used relays. Britain’s Colossus, built to crack encrypted Nazi teleprinter messages, completed a test run in 1943 and was fully operational by 1944. Ten Colossi were in action by the end of World War 2.

I’ve already nailed my colours to the mast by publicly describing Colossus as the first electronic digital computer. By any reasonable measure, it ought to win the prize.

Since Colossus was built to solve a particular problem – decrypting the Lorenz SZ42 cipher machine – it is written off as more like a calculator than a computer by some petty modern-day computer historians.

As it happens, denying Colossus its computerhood handily puts the USA into the gold-medal position. ENIAC, built at the University of Pennsylvania, was undeniably a general-purpose digital electronic computer, and first ran in 1946. The race was on. By the end of the 1940s, the University of Manchester had completed two computers, Baby and the Mark I, dubbed the “electronic brain”; Cambridge had come up with EDSAC; and the Australian Council for Scientific and Industrial Research (now CSIRO) just snuck in at the end of the decade, running a test program on its CSIRAC monster in November 1949.

Let the USA claim the first electronic computer if it really must, because the crown for the first business computer – a category which we take for granted these days – goes to the UK’s Lyons Electronic Office I, better known as LEO. According to Wikipedia, LEO began running its first business application, known as Bakery Valuations (Lyons was a major UK food and catering company in those days) on 29 November 1951.

What will they think of next?

–
PS. The picture of LEO is taken from the Leo Computers Society website. Be sure to pay them a visit – they’ve got a gallery of fascinating photos from the entire LEO range, including installations from the UK, Australia and South Africa. See how computers were delivered in 1962! They don’t make them like they used to…