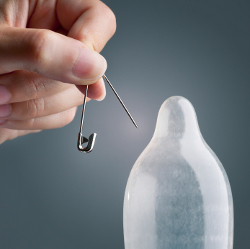 A condom company is sending friend requests from unborn sons to Facebook male users, Mashable reported over the weekend.

A public service announcement from my cervix: fetuses do not send out friend requests.

These messages constitute spam: alarming click-candy that prompts Facebook users to click through to a fake profile that sports a link to the rubber-maker’s site.

The Brazilian company, Olla Condoms, created fake profiles by taking male user names and gluing a “Jr.” onto the end. They then launched friend requests from Male Name Jr. to Male Name Sr.

After the Male Seniors break out in a cold sweat and click through, they’ll go limp in relief to discover they’ve been duped. Then, Olla assuredly hopes, they’ll dash off to the pharmacy to stock up on baby-prevention supplies.

Given the ad campaign’s clear breach of policy, Facebook will likely scrub it out of existence before it’s seen by many targets. So why did the condom company bother?

As CNET’s Chris Matyszczyk writes, this ad campaign was probably cooked up by an ad agency hungry for an award:

Brazilian ad agencies (and those in many other countries) are well known for inventing ad campaigns that never actually run—or perhaps run once in some obscure place and at some obscure time.

The reason for this subterfuge is that once an ad has run (anywhere) they can enter it for awards. Brazilian ad agencies win many awards, but sometimes for campaigns that hardly any Brazilian has ever seen. So it would be interesting to see how many men and boys actually received these friend requests.

Olla has posted a video about the ad campaign, of which they appear to be beamingly proud.

The ad is, indeed, clever and cute.

But honestly, cute doesn’t trump aggravation in this scenario. Do we really need another intrusion into our privacy via the Facebook medium? Sorry to be Scroogey. I do hope the campaign manages to prevent a few unwanted pregnancies.

But cute doesn’t cut it when it comes to privacy and security. This ad campaign and any similar notions to perpetrate Facebook fraud should be strangled in the crib.