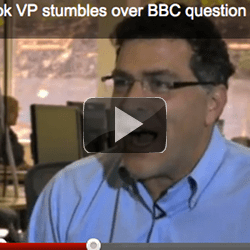 Elliot Schrage, Facebook’s VP Public Policy, was struck dumb by BBC reporter Emily Maitlis when she quizzed him about the ethics of “Sponsored Stories” on Facebook in a television documentary shown this weekend in the UK.

News reporter Maitlis raised the issue of Facebook’s ethics – if you click “Like” on a company or product page on Facebook (26 million people have done so for Starbucks, for example) then your name and photograph could unwittingly appear in online adverts for those products for all your friends to see.

Unfortunately, Facebook provides no way to opt out of appearing in these “adverts”.

It made for some uncomfortable viewing as Schrage struggled to explain the company’s position. You can watch an edited version of the segment in the video below.

Emily Maitlis, BBC: If I press a “Like” button on a brand that could pop up as a Sponsored Story. I might not know about it, I certainly wouldn’t necessarily agree to it..

Schrage: You’re asking a profound question. What’s advertising? When I press a “Like” button on an ad, I’m trying on the Facebook system, I am affirmatively communicating that I am associating myself with whatever I’m liking. And what that does is, it creates a story.

Schrage: Isn’t it a.. I I think it’s a.. it’s a ranking mechanism. I don’t know if I would call it an advertisement.

Depending on where you live in the world, you may be able to view “Mark Zuckerberg: Inside Facebook” via BBC iPlayer. The hour long BBC documentary was certainly an entertaining look at Facebook, its origins and impact on the world, and was – in the most part – supportive of the social network.

Media coverage of the programme has tended to centre on Schrage’s discomfort, and – in the case of one newspaper – Emily Maitlis’s clothes.

Sadly, the much vaunted interview with Mark Zuckerberg himself was short and rather bland (he does, by the way, believe Sponsored Stories to be adverts) and Zuck was most notable for his absence from many sections (“this is where Mark sits, when he’s here”, “this is the house Mark used to live in”).

If you’re on Facebook, you should consider joining Sophos’s Facebook page, where over 150,000 people regularly share information on threats and discuss the latest security news. It will help you keep up-to-date on the latest privacy issues, scams and malware attacks. And yes, we get the irony..