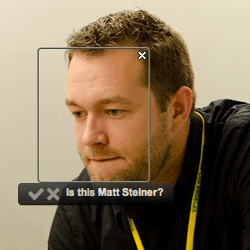 Google is rolling out a new feature called “Find My Face” to Google+ users allowing them to opt-in to a new facial recognition feature for photos shared on the service.

Of course this isn’t the first foray Google has made into the facial recognition arena, they have offered the feature on Picasa Web Albums for a little more than three years.

The feature is not available to all Google+ users yet (at least not my account), but Google has decided to alert users to the presence of the new feature instead of just turning it on.

Facebook introduced a similar function last December, but required users to opt-out of the service causing much consternation in their user community.

Google’s take on this feature sounds sort of interesting. They call it “Find My Face” and when enabled will suggest to people in your circles or who have +1’d a post of yours to tag you in photos they post that appear to contain your face. Matt Steiner from the Google+ team announced the feature including a description of how it works.

Find My Face will provide a prompt like “Is this Matt Steiner?” when it thinks you appear in a friend’s photo. You will be notified if you are tagged and have full control to remove the tag or turn off the feature if you find it creepy.

The comfort level Google+ users will have with Google associating their mug with their real name will likely reduce the adoption of this feature, but for users who use Google+ for photo sharing it might be a nice option.

Despite the fact that I am not comfortable with my information being gathered in this manner, providing people with a choice is never a bad thing.

It is up to every individual to make an *informed* choice about how their personal information is shared and asking their permission is the right approach.

By the way, if you are on Google+ you may want to follow Naked Security’s team.