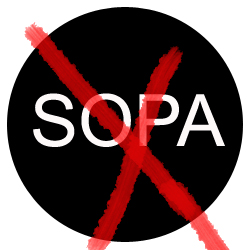 Today is the day that the United States Stop Online Piracy Act (SOPA) is scheduled to be voted on.

Lamar Smith, a Texas republican, drafted the bill to address the film and music industry’s growing concerns around online piracy. SOPA would effectively allow both the US government and copyright holders to seek court orders against websites that display or are associated with intellectual property infringement and piracy.

And unsurprisingly, the who’s who of Silicon Valley, amongst many, many others, are not happy.

For instance, Wikipedia founder Jimmy Wales has threatened a blackout, telling The Telegraph that public uprising is needed to halt the progress of the bill.

And it is no surprise that these companies are up in arms. The bill threatens to change the core of the internet and the services we have all come to rely on. Most of the websites listed rely heavily on user moderation to help control uploaded content.

Under SOPA, a user posting any copyrighted content on YouTube, for instance, puts the video giant at risk of being shut down and taken to court.

An open letter, reposted below from CNET, argues that if the SOPA bill is passed it will stifle innovation by requiring web services to monitor user uploaded links, and give the US government web censorship rights similar, they say, to those used in China, Malaysia and Iran.

An Open Letter to Washington
We’ve all had the good fortune to found Internet companies and nonprofits in a regulatory climate that promotes entrepreneurship, innovation, the creation of content and free expression online.

However we’re worried that the PROTECT IP Act and the Stop Online Piracy Act - which started out as well-meaning efforts to control piracy online - will undermine that framework.
These two pieces of legislation threaten to:

We urge Congress to think hard before changing the regulation that underpins the Internet. Let’s not deny the next generation of entrepreneurs and founders the same opportunities that we all had.

There are also very real concerns on the security ramifications of an internet in a SOPA-world, touched upon in an excellent post by Naked Security’s Chester Wisniewski.

As far as I am concerned, what annoys me about all this is not the question of going after copyright infringers. It is more that those who have something to gain by stopping the infringement are putting third-parties in the firing line. The resources needed to adhere to this bill will be nothing short of crippling for many online businesses. It’s unfair and sets an unsavoury precedent for the internet in the free world. Yuck.

Naked Security contributor Lachlan Urquhart said the following when we were discussing the topic:

“This Bill has chilling implications for free speech, through censorship with DNS blocking, DPI and banning of legal services like encryption and VPN tools! It also requires ad agencies and payment systems that finance the running of the infringing (foreign) site to halt their services on request. This effectively chokes the website owner into complying with the order, despite the hosted content potentially being legal. Although these blacklist decisions can be appealed in court, it seems the process could become reminiscent of the UDRP for trademarks and domain names…where the IP right holder always wins.”

If you don’t want this bill to be passed, then now is the time to make some noise.