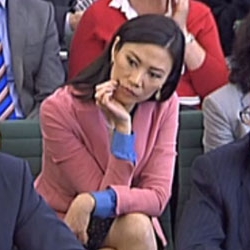 A fake account, claiming to be run by Rupert Murdoch’s wife Wendi Deng, has made a mockery of Twitter’s “verified account” process.

The @Wendi_Deng Twitter account, created shortly after media tycoon Rupert Murdoch joined the social network, has been bemusing Twitter users for the last few days and managed to earn a (much coveted) blue tick from Twitter verifying its authenticity. Now, the account has admitted that it is a fake – and the unknown owner expressed bewilderment as to how Twitter came to verify that it was really being run by the media mogul’s wife. The Guardian even went so far as to quote a News International spokeswoman, who bizarrely confirmed that the Twitter account *did* belong to Wendi Deng Murdoch.

A number of newspapers were hoodwinked by the fake Wendi Deng, no doubt lulled into a sense of security that the tweets were real by Twitter assigning the account a “verified” icon. It certainly made for some amusing headlines.. Certainly questions need to be asked as to how the bogus Wendi Deng’s account ended up verified by Twitter, when it appears that the brainbox behind the mischief never asked them to approve the account.

Clearly someone has been sloppy. And although no harm was done on this occasion, it’s possible to imagine how someone with more malicious intentions could have taken advantage of the situation.

To their credit, Twitter has now removed the “verified account” badge from the @Wendi_Deng account, but it really should never have been there in the first place.