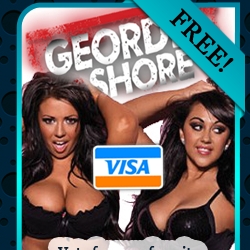 Are Walmart and Ikea *really* giving away gift cards via Twitter? And, if so, would they want you to vote for your favourite character from a low-brow reality TV show?

Naked Security has written many times about the problem of gift voucher scams being spread on Facebook. Messages are posted claiming to offer gift cards for well-known brands such as Starbucks, CostCo or Argos, and when users click on the links they are tricked into completing online surveys.

Some of the scams earn affiliate income for the spammers behind them, others are designed to steal your personal information or to charge your credit card or mobile phone bill.

It seems hardly a day goes by without new survey scams rearing their ugly heads on Facebook.

But it’s not just Facebook that is being troubled by survey scams, they are being encountered on Twitter too.

In this case, a Twitter account has posted a message directed at a number of random Twitter users, including a link, and the hashtag “#walmart gift card”.

And here’s an example, claiming to be related to an Ikea gift card:

When I clicked on one of the links I was taken to a website which didn’t offer me freebies from Ikea or Walmart, but vouchers for free make-up, pizza or a £50 VISA gift card instead.

All I had to do, claimed the website, was vote for my favourite cast member of “Geordie Shore”. (For those fortunate enough not to know, “Geordie Shore” is an execrable British TV “reality” show – in the style of America’s “Jersey Shore” – following the lives of “glamorous” young people in sun-kissed Newcastle Upon Tyne.) Of course, I visited the link from the UK. Chances are that different offers and surveys are offered if you visit from other parts of the world.

Always be suspicious of unsolicited messages – whether they be sent to you via Facebook, Twitter or email – and always be cautious about clicking on unknown links and handing over your data with the promise of receiving something in return.

And if you ever find your own Twitter account is pumping out messages without your permission, change your password and revoke permissions from any suspicious apps or websites that you may have allowed to post on your behalf.

Naked Security’s Paul Ducklin described the scam issue well in a video he made last year, when Twitter users were hit by a bait-and-switch scam offering a free iPhone spread on Twitter.

Clearly these survey scams are making money for the bad guys – so do what you can to ensure that you aren’t making it easy to put more money into their pockets.

2 comments on “Walmart gift card survey spam spread via Twitter, with a twist of Geordie Shore”