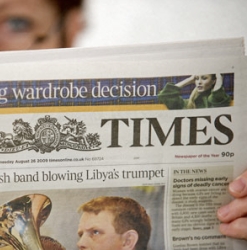 A public inquiry into the practices and ethics of the British media, following the News of the World “phone hacking” scandal, has heard that a journalist for The Times hacked into computers.

According to written evidence given by Simon Toms, News International’s interim director of legal affairs, the unnamed journalist was disciplined in 2009 for involvement in computer hacking.

However, Toms was keen to underline to the Leveson Inquiry that the journalist’s hacking exploits (which were not detailed) had not been authorised by the paper’s management.

"I have been made aware of one instance on The Times in 2009 which I understand may have involved a journalist attempting to access information in this way."

It would certainly be interesting to hear what type of computer hacking occurred, and who the target was, but – at the moment at least – News International and The Times aren’t saying.

Last summer, Scotland Yard announced Operation Tuleta, investigating allegations that malware was used to break into computers and gather information that could be used in newspaper articles.