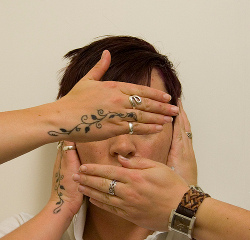 Two U.S. congressman have charged Facebook with evading questions on whether it tracks users for targeted ads.

Meanwhile, Facebook has gone ahead and filed a patent that enables it to do just that, all the while insisting it has no intent to track users when they’re not logged into the social media network.

The congressmen, Joe Barton, a Texas Republican, and Edward Markey, a Massachusetts Democrat, asked the Federal Trade Commission (FTC) to look into accusations that Facebook still tracks users who’ve logged out, in spite of Facebook’s claims to have fixed the issue.

Here’s what Barton told ZDNet’s Emil Protalinski about Facebook talking from both sides of its gigantic social media face:

Facebook seems to be saying one thing and doing another. In the company’s response, it talks a lot about how they don’t currently "track" users online, but they just asked for a patent that would allow them to do just that. Why ask for something you don’t ever plan on using? I don’t believe that Facebook adequately addresses that question. If they get a patent that among other things explicitly mentions tracking the information about the activities of users of a social networking system while on another domain - how will it be used?

The patent in question, filed on Feb. 8, 2011 and granted on Sept. 22, 2011, is titled “Communicating Information in a Social Network System about Activities from Another Domain.”

"Generally, unlike other major Internet companies, we have no interest in tracking people." - Facebook employee, Sept. 25, 2011

"A method is described for tracking information about the activities of users of a social networking system while on another domain." - Sept. 22, 2011 Facebook Patent application

On top of its wiggly response to the congressmen, Facebook also snubbed a Dec. 14 U.S. Congressional caucus meeting on privacy, the justification being, ironically enough, that the caucus wasn’t private.

“The social networking giant indicated their preference to hold discussions in private,” Protalinski blogged on Tuesday.

The purpose of the caucus was to explore Facebook’s recent settlement with the FTC and to probe the company’s plans to protect online privacy of children and teens.

That settlement, which came at the end of November, requires the company to submit to regular privacy audits for the next 20 years and to play straight by, among other things, giving customers “clear and prominent notice and obtaining consumers’ express consent before their information is shared beyond the privacy settings they have established.”

Will the FTC settlement and its required audits bring about material change to Facebook’s privacy practices? It’s hard to imagine it will, given how cagey Facebook is being about its privacy practices and intents with the Congressmen.

While not wanting to give away trade secrets in a public caucus may reflect defensible business smarts, Facebook just doesn’t have a good track record with transparency. Perhaps a few more Congressmen getting ticked off may help to effect a move in that direction.