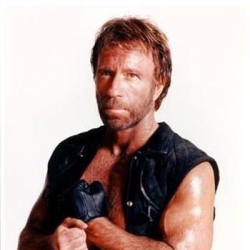 Messages have been spread on Facebook claiming to link to a video news report of the death of awesome martial arts film star Chuck Norris.

A typical message about the alleged death of the “world’s greatest human” and star of such movie highlights as “Karate Kommandos”, “Delta Force”, “Forced Vengeance”, “Return of the Dragon”, “Invasion U.S.A”, “Missing in Action”, and “Missing in Action 2: The Beginning” reads as follows:

Chuck Norris dies at age 71! Not a Joke.
[LINK]
See the video to find out how he died. News today of Chuck Norris death at age 71 has been met with confusion and humour, but sadly it is true.

But Chuck Norris isn’t dead, and the messages point to an all-too-familiar survey scam. Whoever is behind the erroneous messages about Chuck Norris’s death seems to want you to complete one of these surveys. Probably because it will earn them some affiliate cash the more traffic they bring to the webpages.

In my case, I was taken to a website claiming to offer a free £100 Starbucks card. (I don’t drink coffee, so I wasn’t tempted to hand over my personal contact information and date of birth). If you’re one of the many people who fell for this or similar scams, please check your Facebook page to ensure that you are not spreading any messages to your online friends and ensure that you have revoked any Facebook applications, events and “like”d pages that you are uncomfortable with.

12 comments on “Chuck Norris is NOT dead – beware the Facebook scam!”