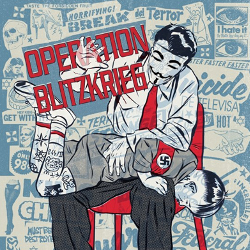 SophosLabs has discovered a spam campaign being used to promote attacks against neo-Nazi groups on the internet.

At the very beginning of 2012, Anonymous started #opblitzkrieg with the goal of identifying and doxing neo-Nazis in Germany.

As they have done in previous operations, they posted individuals’ names, addresses and other personal details.

No information was provided as to how they concluded these people are neo-Nazis, but it seems Anonymous is only fair and open when it serves their own purposes.

Anonymous has a history of extracting an eye for an eye, expressing their opposition to censorship by silencing their enemies’ websites using DDoS attacks. Now, just like the hate groups they purport to oppose, the emails Anonymous is sending out preach hatred and violence. I asked a colleague to translate the message into English to get a clearer picture of what they are trying to do:

The German people and their fascist outgrowth must be defeated.

We have hacked fascist sites and made them public on:
http://www.nazi-redacted-/

Check if a Nazi lives near you and cull him!

This is a new direction for Anonymous. Not that the legal consequences of breaking into servers or DDoS’ing websites has ever scared them away, but now they are spamming and advocating violence.

The best thing to do if you receive a message like this is to throw it in your virtual trashcan where it belongs. Don’t click links, and certainly don’t take the law into your own hands.

Anonymous appears to be the most attention seeking thing since a US presidential candidate and the best thing to do is follow the old motto “Don’t feed the trolls.”

To be clear, I don’t support neo-Nazis, but it is best to report any of their illegal activities to your local authorities.

15 comments on “Anonymous resorts to spamming to spread hateful messages”