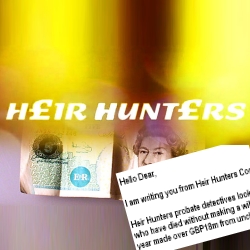 The BBC has warned computer users to be on the lookout for emails claiming to come from a daytime TV show, after it was discovered that scammers are using the disguise to grab personal information.

The emails claim to be associated with “Heir Hunters”, a BBC television programme that focuses on the work of probate detectives, who look for distant relatives of people who have died without making a will.

The unsolicited emails claim to have handed over “thousands and millions of funds to heirs”, some of which is allegedly from the estates of victims of the holocaust.

The emails ask that recipients respond with their full name, date of birth, address and telephone number, so that their details can be checked on a database to see if they are eligible for a windfall. Part of the email reads as follows:

I am writing you from Heir Hunters Company in the United kingdom ,

Heir Hunters probate detectives looking for distant relatives of people who have died without making a will, the United Kingdom government last year made over GBP18m from uncliamed assets.

When people die intestate ( without a will ) and with no known relatives, their names are released by the Treasury.

Every Thursday, a list of these unclaimed estates, the Bona Vacantia (Latin for "ownerless goods" ) is published on the Treasury Solicitor's website.

The race is then on for heir locators to track down the often distant relatives in line for a windfall. Often heir hunters pick more unusual names first, as they are easier to trace.

We came across your profile and email while searching through genealogy database,we will be glad if you can get back to us with your full name, date of birth, address and your direct number if it corresponds to the information we have in our data base in order to enable us carry out necessary verification processes and to get your claim across to you without any delay.

Heir Hunters have handed over thousands and millions of funds to heirs who have no idea of their fortune,some of them ,Holocaust victims' estates, whom some of their heirs tried to flee war-torn Europe,but did any of them survive to claim these fortune ?

The emails even include a link to an online episode of the TV show via the BBC iPlayer in attempt to make the message seem more legitimate.

The BBC has issued a warning about the emails on its website, saying they have that neither Flame Television, the makers of Heir Hunters, or the BBC are connected with the emails. The BBC’s advice is sensible – don’t offer your personal information in response to the unsolicited email, and if you do find you have accidentally shared information with the scammers be careful not to pay them any money. If you believe you are being defrauded, you would be wise to contact the police.

And, if you believe you could be the beneficiary of the assets of a deceased person who didn’t make a will, or died with no known heirs, then you could do a lot worse than visit the UK government’s Bona Vacantia website.