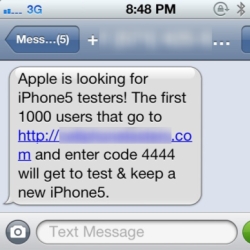 Scammers don’t just lure you into visiting their websites via email, Facebook and Twitter – you can be targeted on your mobile phone too.

For instance, there have been numerous people on the internet who have reported receiving messages like the following:

Apple needs iPhone5 testers! The first 1000 users who visit [LINK] and enter code 4444 will get to test & keep the new iPhone5.

Of course, the promotion has nothing to do with Apple (who do not do public tests of their upcoming products), and – as the iPhone 5 hasn’t even been announced yet – you have close to zero chance of receiving a free smartphone.

Instead, you’re being duped into handing over your personal information which could be used for, well.. who knows what. In the past, we’ve seen the fraudsters earn commission through the traffic they bring to an online survey, or signed-up for an expensive premium rate service.

It’s also easy to imagine how such a scheme could be used for stealing personal information, or gathering data that will later be used against you.

After all, whoever invited you to the bogus iPhone 5 test had no qualms about sending you SMS text spam – so they have already proven themselves to be of a dubious moral character.

Some mobile phone operators allow you to report SMS text spam to them, so they can try to block those behind it. Unfortunately the method of reporting text spam is different from operator to operator, so you will need to contact them (or visit their respective websites) for instructions.