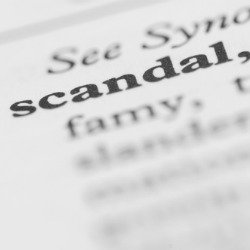 The Vikileaks30 Twitter account was created and catapulted into fame following the introduction of a controversial new bill, C-30.

In a nutshell, C-30 would force telcos and ISPs to provide account information to the authorities upon request, getting rid of the need for warrants altogether.

Pouring salt on this already gaping wound, Mr Toews stated that anyone opposing the bill was siding with child pornographers.

Nice one, Vic. That’s the way to get them onside.

Today, an interview will air on the CBC radio show The House where the Minister attempts to explain his emotive statement:

"And I've thought about this very carefully. If fair minded Canadians have come to the conclusion that my comments in that respect that I made in the heat of Parliamentary debate were not appropriate, I'm prepared to accept their judgment"

The anonymously managed Vikileaks Twitter account started out to raise awareness of the bill and the debate. Soon, the posts started to get a bit personal, referencing the minister’s messy divorce and sharing the minister’s conservative views on gay marriage. Mr Toews wanted to get to the bottom of who was behind the Vikileaks account and demanded an investigation, following the Ottawa Citizen’s report that showed the account was tied to an IP address at Parliament Hill.

The email account associated with the Vikileaks was created at Hush.com, a free service that provides encrypted email messages, to avoid any third parties sniffing while in transit.

The author took down the account yesterday, saying it was set up “to make a point, not ensnare innocent people in a government witch hunt”, according the Ottawa Citizen.

But this snowball shows no signs of slowing down. Videographers purporting to be part of hacker group Anonymous are said to have posted a YouTube video demanding that Mr Toews “resign as minister and that the Conservatives scrap an “Internet spy bill” that only gives the government more power to snoop on its citizens.”

And while the Vikileaks’ account is now dead, Twitter campaigns around this issue are still rife, including #TellVicEverything where people post inane daily activities to show their spirit of openness.