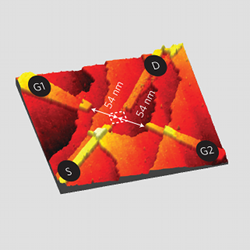 The publication titles of the Nature Publishing Group aren’t for the faint-hearted: there’s the American Journal of Gastroenterology Supplements, the Asian Journal of Andrology, the European Journal of Human Genetics, Neuropsychopharmacology and Pharmacogenomics.

Last, and literally (though not, of course, figuratively) least, there’s Nature Nanotechnology.

If you’ve ever done any repairs to your car, you’ve probably bolted two metal surfaces together, so you’ll know that the most likely diameter of the nuts and bolt-heads used in modern automobiles is about 10mm. Even at this size, in the recesses of an engine bay or a wheel housing, you’ve probably had to go by feel rather than by sight.

So spare a thought for nanotechnologists, who aim to do mechanical engineering at scales way below the wavelengths of visible light. They couldn’t see or feel their work even if they wanted to.

Nevertheless, nanotechnology is mainstream these days. The CPUs in most recently-purchased computers are made using what is known as the 32 nanometer process; 22 nanometre chips are coming soon. (A nanometre is one thousand millionth of a metre – about ten times the diameter of an atom of helium.) Loosely speaking, the process size is half the distance between the closest adjacent transistors in the device. This raises the question: how precise do you have to be to improve on a 22nm process?

Can we ever get to the limit, with transistors just one atom in size?

The University of New South Wales (UNSW) in Sydney thinks it has the answer, having today officially announced the publication of a paper submitted in December 2011 to the aforementioned Nature Nanotechnology.

The paper has the uncompromising title A single-atom transistor.

The media have gone wild.

And there, it would seem, you have it! What more is there to say?

A fair bit. We’re not there yet.

Nanotechnology group leader at UNSW, and corresponding author of the paper, Professor Michelle Simmons, has said, “This device is perfect. This is the first time anyone has shown control of a single atom in a substrate with this level of precise accuracy.” The work described in the paper is great stuff, so Simmons is entitled to celebrate with a touch of hyperbole (and with the trifectorially tautological phrase level of precise accuracy). But don’t expect nanometric CPU-scale transistor arrays just yet.

The researchers in the paper used electrical contacts for their single-atom transistor that were about 20nm apart in one direction, and 100nm apart in the other, and operated it at liquid helium temperatures. That’s somewhere around minus 270°C.

A modern CPU, however, needs thousands of millions of densely packed transistors, and runs at room temperature and above.

You might, by now, be wondering what the computer security connection is in this article. The answer, of course, is that denser CPUs and GPUs mean faster processing, which means yet-more-rapid cryptographic password cracking. And further in the future, UNSW suggests that “this unprecedented atomic accuracy may yield the elementary building block for a future quantum computer with unparalleled computational efficiency.”

Quantum computers are expected to be able to approach certain crypto-cracking tasks – such as factoring large prime products – at rates which might undermine our current assumptions about security.

We probably have a way to go before that happens, though. The institution at the bleeding edge of factoring prime products using quantum computing seems to be the University of Bristol, where researchers recently took apart the number 21.