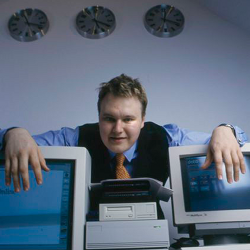 Kim Dotcom of Megaupload fame – you’ll remember him as the larger-than-life figure who was controversially busted by the cops hiding in a panic room in his $30 million mansion in New Zealand – has finally convinced a court to grant him bail.

Prosecutors have claimed, since Dotcom’s arrest in January, that he represented a flight risk. Dotcom had multiple names and nationalities, a lavishly wealthy lifestyle, contacts abroad, a helicopter and lots of cars.

But Dotcom is now free. It seems that he’s had sufficiently many assets confiscated that the court no longer thinks he’ll be able to get clear of New Zealand and will thus be forced to turn up for his extradition hearing, set for August this year.

According to reports, Dotcom’s bail conditions prohibit helicopters near his property, and require him to stay within 80km of his house. (As you can see, even 25km gives him access to plenty of coastline.) Dotcom is facing extradition to the USA because that’s where he’s been charged with a raft of serious offences related to his file-sharing service Megaupload, including racketeering (organised criminality) and money laundering.