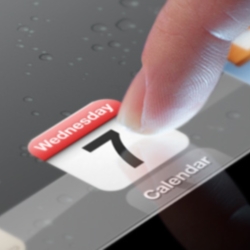 It is widely anticipated that Apple will announce a new version of its iPad tablet computer in San Francisco on March 7th.

An invitation sent to journalists, inviting them to an event organised by Apple, has fueled speculation even further as it appears to show a close-up of someone using an iPad.

Could it be the new iPad with a much lusted for improved display and souped-up processor? Only time will tell..

Of course, one group that isn’t bothering to wait are the spammers and scammers who frequently tempt the unwary into clicking on their links, or completing their revenue-generating surveys, by offering the latest Apple gear.. for free.

And even though the iPad 3 doesn’t exist yet (and who can forget the iPhone 5 scams that all looked a bit silly once Apple actually announced the iPhone 4S instead?) we are seeing plenty of examples of Facebook pages and tweets that appear to be attempting to trick users into thinking they can get one for free. As Apple hasn’t even announced the existence of an iPad 3, these posts and pages (some of which have existed for months) are clearly up to no good. It would be great to see social networks like Facebook and Twitter do more to clean up such clearly dubious activity, to better protect their userbase.

Chances are that we will see Apple announce an iPad 3 very soon. But don’t be duped into believing there’s an easy way to get one for free.

By the way, if you’re a Facebook user and want to keep up on the latest threats and security news I would recommend you join the Sophos Facebook page – where more than 160,000 people regularly discuss the latest attacks.

5 comments on “Free iPad 3? It doesn’t exist! Beware of scams”