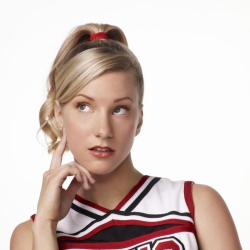 Heather Morris, famous for playing cheerleader Brittany in the popular “Glee” TV show, is said to be the latest celebrity to have had nude photos leak onto the web.

The naked pictures are alleged to have been stolen by hackers from the 25-year-old actress’s mobile phone.

Of course, Heather Morris isn’t the first celebrity to have fallen victim to a nude photo hacker.

Nude photos and videos of Vanessa Hudgens, the star of “High School Musical”, surfaced on the net in 2011, after it was claimed the actress’s Gmail account was hacked.

In November 2011, Christopher Chaney of Florida pleaded not guilty to hacking into the email and cellphones of some 50 people, including Scarlett Johansson and Mila Kunis. He has claimed he was driven by “addiction” and apologised for his actions, but denied selling private celebrity photographs to websites and magazines.

There’s no suggestion that Chaney is involved in the latest incident involving Heather Morris.

Last week, “Mad Men” star Christina Hendricks denied that a topless photo circulating on the internet was of her, but did claim that her phone had indeed been hacked.

Whenever one of these stories hits the social networks, there are inevitably thousands of hot-blooded men who turn to internet search engines, hoping to find the explicit photos.

And, equally predictably, there are often cybercriminals waiting to exploit the trending topic – disguising their malware to appear as if it is a sleazy picture or movie. Remember the Erin Andrews peephole video, for instance?

So, be on your guard.

Celebrity websites might be wise to take some advice too. Remember if you publish photographs that have been hacked from the phones or email accounts of celebrities you are, effectively, handling stolen goods… and committing a crime yourselves.

And finally, here’s my recommendation to every Hollywood actor/actress, rapper and TV reality star. Cut it out and keep it in your wallet: