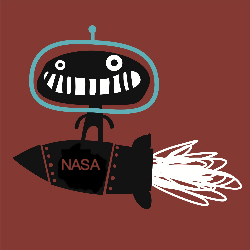 2,500 years ago, the Greek astronomer Eratosthenes figured out the world was round and accurately determined its size.

CPU available for computing project: None.

RAM: Whatever capacity the guy had without caffeinated beverages.

He did it with observation of solar-coverage discrepancies between his home town along the Gulf of Sidra (now Libya) and Alexandria on a particular day of the year.

Can you do better than a pre-digital librarian from the great Library of Alexandria? Can you build an app that can determine the Earth’s size?

NASA, along with citizens and organizations around the world, is inviting all to try. It’s being run as a codeathon: an event that brings together citizens interested in collaborating on the development solutions that address critical challenges. Here’s how the organisers describe it:

A codeathon celebrates software development in its most positive context—using minimal resources and maximum brainpower to create outside-the-box solutions in response to interesting problems. Codeathons are technology development marathons, drawing on the talents and initiative of the best and the brightest software developers, engineers, designers and technologists from around the world, who volunteer their time to respond to real-world problems with solutions than can have immediate impact. They’re looking for a broad range of skills: engineers, technologists, scientists, designers, artists, educators, students, and entrepreneurs—anyone, they say, who has “a passion for changing the world” and who’s willing to contribute.

According to the site, the Earth-measuring challenge (one of many) is to build an app that will:

President Obama and other heads of state endorsed the principles of the codeathon on 20 September 2011.

The principles in question are those of the Open Government Partnership—a new multilateral initiative to promote transparency, participation and collaboration between governments and citizens. Since then, 52 countries have joined.

At the events, teams focus on solving a particular challenge, competing with other teams around the world to use publicly available space and data to design innovative solutions to a pre-determined series of global challenges.

The challenges are listed on this page. Here are brief synopses for a few more examples:

The codeathon is a great, worthy, productive use of hacker talent.

There’s an added bonus in this case: It won’t result in jail time!

One comment on “NASA invites you to hack space!”