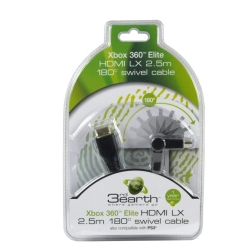 Do you find that computer viruses are too noisy? Do they interfere with the quality of images when you’re playing games on your Xbox 360?

It appears that the 3rd Earth Xbox 360 Elite HDMI Swivel Cable is just what you need! Computer viruses making too much noise has, of course, been a problem for over twenty years. Who can forget the old Anticad DOS virus which could play the “Blue Danube” through your PC speaker, or the W32/Music worm that spread in 2000 playing the first few bars of “We Wish You A Merry Christmas”?

More recently there was something of an internet scare when ragtime jazz music began being played from many people’s computers, making some believe they had become infected. Fortunately it just turned out to be a cack-handed promotion by Google.

If anyone has tried one of these cables we’d love to hear what your experience was. Did it really quieten your viruses?

48 comments on “HDMI cable protects your Xbox 360 from noisy viruses!”