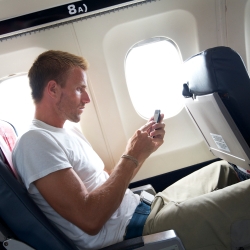 The US Federal Aviation Administration (FAA) is going to take a “fresh look” at using personal devices such as e-readers and tablets during takeoff on planes, the New York Times reported on Sunday.

According to the NYT, the FAA will test a variety of gadgets but is staying away from testing smartphones. Bad news if you want to play with your iPhone on flights, good news if you don’t want to sit next to yammering people.

Laura J. Brown, deputy assistant administrator for public affairs for the FAA, told the NYT that current rules permit airlines to request use of electronic devices “once the airline demonstrated the devices would not interfere with aircraft avionics”.

Airlines have abstained from doing so because such testing is expensive and difficult. Thus, the FAA is taking it upon itself to ascertain how to test the latest electronics and their effect on airplanes.

As it is, the last time the testing was done was in 2006, before iPads and e-readers such as Kindle existed.

So what’s the rationale for not using your phone or other gadget on the plane, particularly given that you can use Wi-Fi, watch movies, and play video games on flights?

Theory holds that gadgets’ electromagnetic emissions could interfere with navigational instruments in the cockpit.

Gadget use could possibly result in instrument problems, as phones in the cabin could exceed the rated allowable interference levels for some aircraft avionics.

In fact, reports from flight crews of anomalies that they believe were caused by electronic devices (confirmed by switching the passengers’ devices on and off and watching the resulting effects on the wonky systems) prompted a 2000 study by Boeing.

However, even after Boeing purchased the alleged offending devices from passengers and rigorously tested them, the aerospace company couldn’t reproduce the anomalies. The report’s conclusion:

As a result of these and other investigations, Boeing has not been able to find a definite correlation between PEDs and the associated reported airplane anomalies.

As Wired pointed out in a 2008 article, since the 1960s, cockpits and communications systems have been protected against electromagnetic meddling through safeguards like shielded wiring and support structures.

And as Wired also pointed out in that same article, much of the resistance to allowing gadgets, at least back in 2008, came not from research showing that they were dangerous but instead from the call carriers.

In other words, the real danger of using your cellphone during a flight or during lift-off was that you’d harm call carrier profits. After all, it can get kind of hairy to keep those signals flowing in the wind, as Wired describes:

When phones ping for signals at 35,000 feet, they can hit hundreds of towers at once, necessitating complicated parsing of roaming agreements. Providers don't want the hassle if they're not being properly compensated, so the government has left the plane ban in place.

ABC News 20/20 came to the same conclusion in a December 2007 report: The primary reason for the ban on phone use in-flight is that neither the FAA nor the Federal Communications Commission (FCC) want to pony up the money to perform conclusive safety tests.

Likewise, for their part, the airlines just don’t see any return on investment for paying for the tests. As the NYT’s Nick Bilton notes, the FAA’s change of heart might well be a sign that it’s bowing to public pressure. A quote from the FAA’s Ms. Brown:

“With the advent of new and evolving electronic technology, and because the airlines have not conducted the testing necessary to approve the use of new devices, the FAA is taking a fresh look at the use of personal electronic devices, other than cellphones, on aircraft.”

But as Mr. Bilton says, it’s certainly not time to leave the magazines and paperbacks at home quite yet. He chatted with Abby Lunardini, vice president of communications at Virgin America, who explained what the testing would require. He writes about how excruciatingly laborious and expensive this testing will be:

The current guidelines require that an airline must test each version of a single device before it can be approved by the F.A.A. For example, if the airline wanted to get approval for the iPad, it would have to test the first iPad, iPad 2 and the new iPad, each on a separate flight, with no passengers on the plane.

Onerous, yes. Expensive, for sure.

But is all that necessary to protect our security?

It certainly doesn’t appear so. This isn’t really a story about security. This doesn’t boil down to passenger safety.

It just boils down to money, masquerading as security concerns.

Are you pining to use your iPad and Kindle on the plane? If you could push the “engage” button on airlines lifting the ban without more exhaustive, expensive testing, would you?

12 comments on “Want to use your gadgets at takeoff and landing? US FAA to review policy”