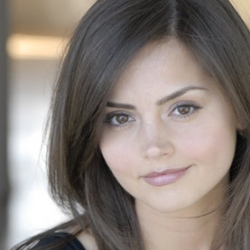 Jenna-Louise Coleman has been unveiled as the new “Doctor Who” companion, joining the BBC TV time traveller in his TARDIS later this year.

“Doctor Who” is one of Britain’s biggest television shows, and is popular elsewhere around the world, so it was no surprise to find 25-year-old actress Jenna Louise-Coleman’s name was a trending topic on Twitter today.

Unfortunately, there are frequently mischief-makers, scammers and cybercriminals waiting to exploit a popular search term or hashtag.

For instance, see these messages mentioning Jenna-Louise Coleman and referring to sex videos: Human nature being what it is, you probably wouldn’t be that surprised if some sci-fi fans clicked on the links out of err.. curiousity. Clicking on the video thumbnails is definitely ill-advised. When I examined the page, I found that each of the videos were masking a secret Twitter follow button.

Browser plugins such as NoScript can help protect against clickjacking, and warn you about the true intentions of webpages such as this. Of course, the scammers could just have easily transported you to a webpage containing malware, a survey scam or a rogue application. The point is that you should always be cautious about the links which you click on.

Of course, it’s Jenna-Louise Coleman today and will be someone else tomorrow. Twitter spammers are simply grabbing the latest trending topics and shoving them in their tweets in the hope that users will stumble across them and fall into their trap.

If only we could dematerialise the bad guys to Metebelis III or throw them into a chronic hysteresis and never be troubled with them ever again..