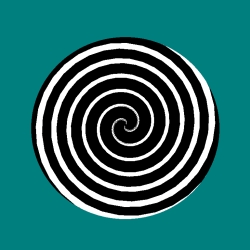 Stop press! The art of computer viruses may not be dead, after all.

Vancouver-based artist Bratsa Bonifacho says his latest collection of paintings has been inspired by computer malware.

An unusual name, you might think, but it is apparently inspired by a number of viruses from yesteryear including VBS/Horty (which claimed to offer pornographic content of adult film star Jenna Jameson), 2002’s MyParty email worm, and the CoolNow MSN Messenger worm. In the words of the artist, his work..

"..explores the tensions between the logical, linear scripting of virus programs and their capacity for destruction. In the simplest terms, he imitates the effects of computer viruses and worms by scrambling letters and messages in his large-scale oil paintings. His work carries the elegance of programming code. It also indicates the deep layers of chaos and confusion caused by viruses."

Golly. What a chance I missed entering the field of computer security rather than art criticism. A layman like me wouldn’t have understood that Bonifacho “communicates and expresses essentially non-verbal thoughts and emotions abstractly, within the discipline of formalism – through colour and shape, gesture and surface..” unless I had visited his website.

Today most malware isn’t written to impress the virus writer’s peers by spreading digital graffiti, but instead to stealthily steal information. As a result, the art we used to see from malware has pretty much disappeared.

Unlike the old days, most modern malware authors don’t like their creations to draw attention to themselves by plotting Mandelbrot fractals on the screen (as the Tequila virus did) or swirling spiraling whirlpools (W32/Hybris) or give the opportunity to throw coconuts at members of the computer security community. It’s not just a visual art either.

In “the old days” some malware authors would sometimes spend months takibg care, honing their creation so that no anti-virus products would detect it, whereas today we see the result of mass-produced malware created on a conveyor belt.

Today’s cybercriminal, in the main, doesn’t care if some anti-virus products detect his or her code. After all, if this particular variant of the malware doesn’t successfully infect computers there’ll be another one along in a couple of minutes.

It’s always been a bad thing and indefensible to spread malware irresponsibly and infect innocent people’s computers, but there was some pride shown by (at least some of) their creators in the past in what they had written.

The old-school malware writers probably got a kick out of thinking that anti-virus companies were burning the midnight oil, attempting to find a way to make their anti-virus software detect infections reliably.

And although we in the anti-virus industry never appreciated their efforts, we could grudgingly concede that some of the cybercriminals had programming talent – albeit misdirected.

So, I think you could potentially argue that there was an art involved in virus-writing.

In the present day, however, we have to acknowledge that any pretence of “art” has been subsumed by mass-produced malware of typically poor quality.

Despite the efforts of painters such as Bratsa Bonifacho, the art of computer viruses is largely dead.

Don’t get me wrong, I’m not shedding a tear for its loss. I just hope that one day it might be joined in its computer coffin with the insidious mass-produced data-stealing malware that many people are impacted by today.

13 comments on “Is the art of computer viruses dead?”