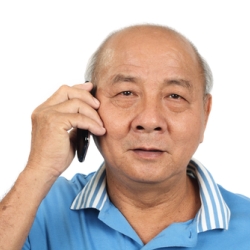 Fujitsu says it has created a system that can recognise when somebody is being victimized by a phone scammer, by combining voice intonation analysis with keyword recognition.

Mobile phone scams are a plague on Japan’s elderly. Criminals often pose as the victim’s acquaintance or as a figure of authority, such as a police officer or lawyer.

A common con involves criminals who pose either as victims’ relatives or as acquaintances of their loved ones. They then try to convince their intended victims that they’re in trouble and need money transferred to an account to bail them out.

Fujitsu has released a description of its new system, which, it says, can analyse such conversations and warn family members or others as they take place.

According to Fujitsu’s release, the company, together with Nagoya University, in central Japan, has developed software that detects changes in voice pitch and level that are common in scam victims’ intonation.

Images in the release show a flattening in vocal high-frequency range that occurs when a person is subjected to psychological stress as another party conveys distressing information.

Phone scammers typically put their victims into these states of stress by concocting stories that are peppered with ominous words, such as “indebtedness,” “compensation,” “debt,” or “repayment.”

When victims are overwhelmed with distressing information, some are susceptible to losing their powers of judgment. In these instances, a situation known as “overtrust” occurs.

Here’s how Fujitsu describes this condition:

There are limits to human powers of perception and judgment. When overwhelmed with information that may be distressing, some individuals, without knowing it, may have a diminished capacity to objectively evaluate information provided by another party—a situation known as "overtrust." In situations of overtrust, there is the risk of believing everything another person is saying, even in cases of remittance-soliciting phone phishing scams, for example.

The scam detection system combines frequency analysis with voice recognition to scan for words spoken by potential scammers. It counts the number of times the caller uses words typically used in scams, based on a keyword list provided by Japan’s National Police Academy and on recordings of actual remittance-solicitation phone scams. It might sound like eavesdropping, but as Fujitsu describes it, the technologies ignore everything except the keywords on the pre-registered list and the frequency with which they’re uttered.

Nagoya University and Fujitsu are collaborating with the National Policy Academy and The Bank of Nagoya to test the technology on mobile phones.

While the system already has a 90% success rate in tests done to date, Fujitsu says that future testing will evaluate the technology’s practical utility in actual cases of fraud and attempt to come up with solutions to any problems that arise.

I can imagine that such problems might result from analysing conversations that involve people in the habit of changing their intonation frequencies when they’re not actually distressed. Actors, perhaps? Or perhaps those who are trying to hide something?

Or what about when people are actually distressed, even though no scam is involved? Would a false alarm result from a divorced couple discussing alimony payments, for example?

I’ve asked Fujitsu for the technology’s false positive rate, and I’ll let you know what they have to say.

In the meantime, for more reading on phone scams, the US Federal Trade Commission (FTC) has a list of common cons on this page. 800notes.com has another comprehensive list here.

Would you install this type of nanny phone software to eavesdrop on your relatives’ conversations, or does it all seem too intrusive? Please let us know in the comments below.

Man on phone image from Shutterstock.