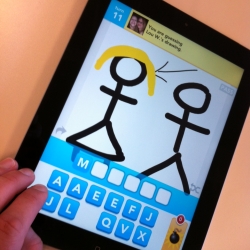 The Draw Something game is a soaraway success, with hundreds of millions of downloads onto iPhone and Android smartphones since it was launched early last month.

Everyone’s talking about it, and the hype became even huger when OMGPop, the New York software house that created the app, was sold for a cool $210 million to gaming goliath Zynga.

But with so much buzz and interest in the Pictionary-style game, it’s perhaps not a surprise to find scammers trying to make a quick buck by leaping on the bandwagon.

Here’s a Twitter account we found, that’s spamming users telling them that they have won a prize. From what we have seen, the account appears to be targeting Twitter users who have mentioned “Draw Something” in past tweets.

The Twitter account, which is not affiliated with OMGPop, claims it is giving away 5000 prizes to “lucky” Draw Something fans, and that players can claim their award by visiting a newly-created website called drawsomethingwinner.com.

If you visit the site you are asked a few simple questions, before being told that you are eligible to receive an award. What you will discover, however, is that you are taken to an all-too-familiar survey scam. Your chances of ever receiving a prize are remote – chances are that you will either end up handing over personal information, or will be helping the original scammer earn commission. We’ve reported the account as spam to Twitter, and hopefully they’ll shut it down soon. But it wouldn’t be a surprise to see more Draw Something-related scams both on Twitter and perhaps on Facebook also given its tremendous popularity.

Update:
Well, what do you know.. as soon I tweeted about this, I instantly got a response from a different Twitter scam account:

So I’ve reported that account as a spammer too. 🙂

6 comments on “Draw Something scam targets players via Twitter”