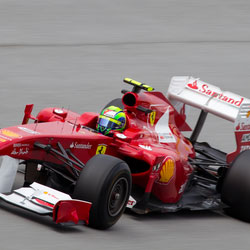 Anonymous hacktivists appear to have successfully blasted the Formula 1 website off the net, with a distributed denial-of-service (DDoS) attack.

The internet attack against www.formula1.com comes just ahead of Bahrain’s highly controversial hosting of the Formula 1 Grand Prix this weekend, which is planned to take place despite violent protests in the country. Under the banner of “#OpBahrain”, Anonymous hackers also defaced a website associated with Formula 1 racing, and posted a press release: For over one year the people of Bahrain have struggled against the oppressive regime of King Hamad bin Al Khalifa. They have been murdered in the streets, run over with vehicles, beaten, tortured, tear gassed, kidnapped by police, had their businesses vandalised by police, and have tear gas thrown in to their homes on a nightly basis.

Still the regmine persists to deny any meaningful reform and continues to use brutal and violent tactics to oppress the popular calls for reformation. Not only is the Human Rights situation in Bahrain tragic, it becomes more drastic with each passing day. For these reasons the F1 Grand Prix in Bahrain should be strongly opposed. The Al Khalifa regime stands to profit heavily off the race and has promised to use live ammunition against protestors in preparation. They have already begun issuing collective punishment to entire villages for protests and have promised further retribution "to keep order" for the F1 events in Bahrain. The Formula 1 racing authority was well-aware of the Human Rights situation in Bahrain and still chose to contribute to the regime's oppression of civilians and will be punished.

Attacks against websites are hardly likely to change the minds of the Grand Prix organisers, but there’s no doubt that these actions do make even more people aware of the controversy surrounding the race this weekend.

DDoS attacks are one of the favourite weapons in Anonymous’s armoury. Just earlier this month, Anonymous supporters successfully launched DDoS attacks against websites belonging to the British Home Office and 10 Downing Street.

Internet users are reminded that denial-of-service attacks are illegal. If you participate in such an attack you could find yourself receiving a lengthy jail sentence.

26 comments on “Formula 1 website attacked by Anonymous, brought down by DDoS”