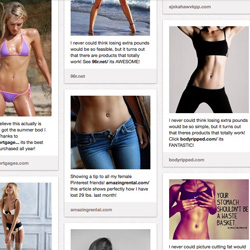 As Pinterest’s popularity increases, so do the reports of spam on the fast-growing photo-sharing network.

A Naked Security reader reported to use today spam they had received via Pinterest, where the spammer had tagged their name in the message they had posted. The Pinterest posts, which claimed to offer a wonder diet, used various images of scantily-clad models lazing about in their lingerie or swimsuits to entice unsuspecting users into clicking.

If you were one of the people who clicked on the bit.ly link, however, you might find yourself redirected (via a dental website that really shouldn’t be allowing anyone to redirect traffic to a third party site) to a bogus news page, promoting alleged diet products. The good news is that Pinterest is now blocking the links.. ..but why haven’t they also closed down the profile of the spammer, who has “pinned” hundreds of other similar posts? My guess is that it won’t be long before the spammer is posting links which aren’t being blocked by Pinterest, and users will have yet more spam of which to be wary.

Traditional email spam may have reduced somewhat in the last year or so, but what we are seeing is a rise in spam exploiting social networks. And relatively young websites like Pinterest are still finding their feet when it comes to securing their users.

Is it any wonder that Pinterest spammers claim they can earn $1000 per day?

7 comments on “Pinterest diet spam – is the site doing enough to stop it?”