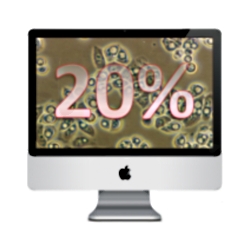 Important: Some reports have erroneously reported the following article as saying that 1 in 5 Macs are *infected* with Windows malware. That is inaccurate. They are, according to our study, harbouring or carrying Windows malware. An important difference! As we explain below, the Mac malware discovered is a much more serious threat to Mac users than the Windows malware – but it would be good if it was all cleaned up! Thanks to @ErrataRob for suggesting I post this clarification. One in every five Mac computers is harbouring some kind of malware, a new study from the experts at Sophos has revealed.

Sophos has revealed a disturbingly high level of malware on Mac computers – with both Windows and Mac threats being discovered.

A 100,000 strong snapshot of the millions of Mac computers which have recently downloaded Sophos’s free Mac anti-virus software, revealed that 20% of Mac computers were carrying one or more instances of Windows malware.

Although Windows malware on Macs won’t cause symptoms (unless users also run Windows on their computer), it can still be spread to others.

More disturbingly, Sophos’s analysis also shows that 2.7% (one in 36) of Macs which downloaded the free anti-virus product were found to be infected by Mac OS X malware. Malware can spread onto Macs via USB drives, email attachments, website download, or even a silent drive-by installation where the user doesn’t realise their Mac’s security has been subverted.

Sadly, cybercriminals view Macs as a soft target, because their owners are less likely to be running anti-virus software. Bad guys may also believe that Mac users are likely to have a higher level of disposable income than the typical Windows user. So, they might believe the potential for return is much higher.

Some Apple fans might feel relieved that they are seven times more likely to have Windows malware on their Macs than Mac OS X-specific threats, but they shouldn’t be.

What Mac users really need to do is protect their computers now (there really is no excuse, free anti-virus software is available for Mac home users), or risk allowing the malware problem on Macs to become as big as the problem on PCs in the future. Let’s look at the stats again, revealed by this study.

And here’s another factoid from a field that has nothing to do with computer security:

Just like malware on your computer, Chlamydia commonly shows no obvious symptoms. But left undetected Chlamydia can caused serious problems, such as infertility.

Some countries are so worried about the prevalence of Chlamydia that they have created national screening initatives and advise that people under 25 who are sexually active should be tested for the infection annually.

The good news is that Chlamydia is easy to treat.

And, if it isn’t too tacky to make a parallel, so is malware on Macs.

Although most of the malware we’re currently seeing on Macs is designed to infect Windows, you should still be a responsible member of society and ensure that you’re keeping your Mac squeaky clean.

Currently, Mac users are doing a pretty poor job on that front. Amazingly, some of the malware discovered by Sophos on the 100,000 Mac computers sampled dates back to 2007, and would have been easily detected if the users had run an anti-virus sooner.

Unlike a test for Chlamydia, you can check your Mac for something nasty from your armchair. The test is painless and free – you just download an anti-virus and allow it to check your computer and protect it against infections in future.

Here’s some advice for Mac users: