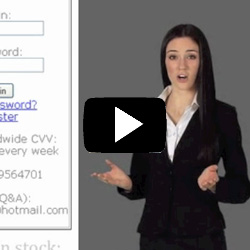 Cybercrime is big business these days, in fact it’s an industry. So it’s not a surprise to find that criminals are embracing ecommerce. But I’m sure some will be surprised to discover just how professional and legitimate criminal websites can appear.

For instance, watch the following video to see footage of a website that was selling stolen credit card details.

The UK’s Serious Organised Crime Agency (SOCA), working alongside the FBI and the US Department of Justice, has announced that it has seized the domain names of 36 websites used to sell stolen credit card information. The websites use advanced e-commerce Automated Vending Cart (AVC) platforms to allow them to sell large numbers of credit card and bank details.

Visitors to the websites are now greeted by a message from the authorities: According to a SOCA statement, two men were arrested early yesterday morning suspected of making large scale purchases of compromised data from websites such as those described above.

In addition, the UK’s Dedicated Cheque & Plastic Crime Unit (DCPCU) has seized a number of computers suspected of being used to facilitate Fraud Act offences, and an AVC operator based in Macedonia has been arrested by the Macedonian Ministry of Interior Cyber Crime Unit.

We should all be grateful that the authorities are taking action against those who are turning cybercrime into such a significant underground industry.