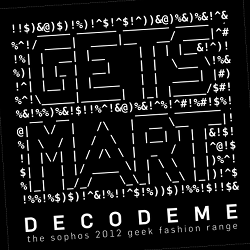 Early tomorrow evening (that's Tuesday 15 May 2012 in Australia), the main part of this year's AusCERT conference kicks off.

As usual, Sophos will be there, both to present a paper at the conference proper, and to provide delegates with some fun solid security advice from the Sophos booth in the trade show area.

And that means it’s #DECODEME T-shirt time. If you’re going to be attending AusCERT 2012, which is once again being held on Queensland’s almost-always-summery Gold Coast, be sure to stop by the Sophos booth to collect your free shirt. Remember, as always, that the shirt isn’t just a geeky fashion statement, but a fun puzzle which you can solve to win a prize.

This year’s prizes are NERF guns: we’re still weighing up exactly which model to choose, but expect one feature: full-auto fire.

We’re giving away two prizes at the AusCERT conference itself. Just collect the T-shirt, solve the puzzle, wear the shirt and attend Rob Forsyth’s talk at 16:20 on Wednesday afternoon.

Don’t be put off by the fact that Rob’s talk is in the “vendor” stream. If you have a booth at the event, as Sophos does, that’s where your talk ends up. But Rob won’t be doing a vendor schpiel. That would be boring, wouldn’t you say?

Instead, Rob will be showing some of the dramatic ways in which mobility of data is changing our lives, taking a peek over the horizon, and asking, “Is this really where we want society to go?” After all, if it’s not, then it’s up to us to do something about it!

We’ll also be giving away a third NERF prize for online solvers.

It doesn’t matter where you’re from, or whether you’re attending the conference.

If you solve the puzzle in time, you’ll go into our draw to win.

This year’s puzzle is a little different from last year’s AusCERT #decodeme, and from this year’s RSA #decodeme.

In theory, you can solve DECODEME 2012 with nothing more than pen-and-paper, although a calculator would be useful.

As usual the puzzle will operate as follows:

* The puzzle has two stages. The text on the shirt leads to to a URL which contains a second challenge.

* Answers must be submitted via email to me: duck@sophos.com.

* You can request hints by asking me privately using duck@sophos.com, or by following #sophospuzzle on Twitter.

3 comments on “Calling all #sophospuzzle fans – AusCERT is here, and so is #DECODEME 2012!”