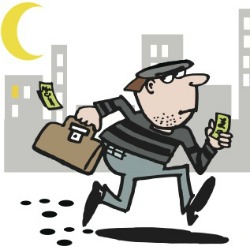 Here’s a tip for anyone planning to rob an internet cafe: remember to log yourself off Facebook before you make your getaway.

According to media reports, that was precisely the mistake made by one man who (with an accomplice) robbed an internet cafe at gunpoint north of Cali, Colombia recently.

Having spent a while browsing the web, the men approached the cafe’s cashier as if to pay for the internet service. However, instead of handing over a couple of thousand pesos, they brandished a gun and assaulted the manager before making off with all of the money in the register on a stolen motorbike.

However, when investigators arrived at the crime scene, the cafe’s manager was able to point out that the robber had not logged out of Facebook – and it took no time at all to identify the assailant and determine his home address.

As a result, a man has been arrested.

No doubt he’ll rue the day he was sloppy with his computer security – and will have learned the hard way the importance of logging out of your Facebook account when you have finished with it.

You don’t have to be a criminal to realise that it’s important to protect your Facebook account. So remember not to leave it open for anyone to access on an unattended computer.

3 comments on “Two men rob internet cafe at gunpoint, but forget to log out of Facebook first”