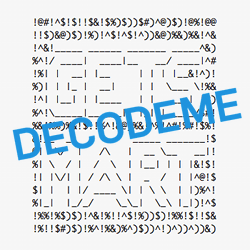 Here is the full text of the #sophospuzzle from this year’s AusCERT T-shirt.

Cut, paste, solve and get in the running to win a NERF gun.

There are two ways to win.

1. Solve the puzzle before 4.20 pm Wednesday afternoon, Queensland time. Put on the T-shirt. Attend Rob Forsyth’s presentation at AusCERT 2012. Rob will draw two NERF gun winners right there at his talk. Your chance of winning will be excellent – but you must be present to collect your prize! You do not need to be at the conference, or in Australia, or even on Earth, to participate by email.

Entries from the International Space Station (ISS) and beyond are most welcome.

If you attend Rob’s talk and don’t win, you’ll automatically be entered in the worldwide draw for a second chance – assuming you’ve emailed your solution to me so I know who you are.

Don’t worry if you’re not a programmer or a techie. This year’s puzzle is designed so it shouldn’t take long to complete, even if you are also dutifully attending the AusCERT conference and its busy social schedule. You can solve it without writing any code.

The text on the shirt converts into a URL – by modern standards, it’s not really encrypted, merely encoded in an unusual way – which takes you to Stage Two. The second stage is a conundrum involving dealing bridge hands from multiple packs of playing cards. (You don’t need to know anything about bridge, except that there are 52 cards in a standard pack, and 13 cards in a bridge hand.)

Strictly speaking, you only need to be able to add, multiply and divide to get to the end. A calculator is more than enough to solve both stages in the time allowed.

You are welcome to ask me privately for hints by emailing duck@sophos.com, or by following me on Twitter and keeping an eye on the hashtag #sophospuzzle. But please don’t blurt out the solution – it spoils the puzzle for everyone else. If you know how to solve it, offer hints and advice, not the final answer. A final note: if you are on the International Space Station (ISS) or elsewhere away from the earth’s surface, you will need to provide an earthly address for delivery of the prize if you win.

We can’t deliver off-earth. Something to do with Sir Isaac Newton, apparently.

PS. The second stage of the puzzle may seem to be an arcane and pointless calculation. But it is pedagogically valid. There’s an interesting security lesson buried in it, which I’ll explain when the “how to solve it” video comes out.