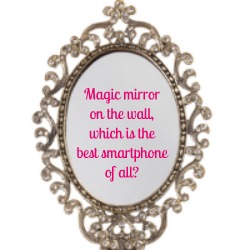 What is the best smartphone ever?

Well, Apple has now addressed this “bug”, reports The Verge.

Wolfram bases its choices on a phlethora of factors, and The Verge says it chose the “Lumia 900 as the best smartphone due to a catalog of four different five-star reviews.” So NakSec colleague Anna just asked her new iPhone, and Siri replied in its deadpan stylee “Wait, there are other phones?”

And apparently, Nokia is now accusing Apple of “overriding the software” after the quirk was noticed, writes the BBC.

I think this is rather odd thing for Nokia to suggest. After all, Nokia, I imagine, has received some great PR on the back of this, so why would it point out that Apple is tweaking its Siri interface? Of course it is. As if Nokia wouldn’t have addressed this “issue” had the tables been turned.

But, whatever happens next, I just love stories like this. They make my day.

15 comments on “Magic mirror on the wall, what’s the best smartphone of all?”